The electromagnetic wave WiFi frequency is the number of times the signal makes one complete up and down cycle in 1 second. A cycle can start when the signal rises from the center line, falls through it and rises again to meet it.

Also, a cycle can be calculated from one peak’s center to the following peak’s center. Wherever you begin measuring a cycle, the signal must complete a sequence back to its initial location before repeating the same cyclic pattern.

In the example below, 1 second has passed. Within that time, the signal went through four complete cycles per second (Hertz).

Radio Frequency (RF) refers to the frequency range from around 3 kHz to 300 GHz. It encompasses a wide range of radio communication media. A range of frequencies may be utilized for identical purposes. The range is referred to as a band of frequencies.

The 2.54 GHz band used for wireless LAN (WLAN) communication and WiFi connection lies between 2.4 GHz and 2.4835 GHz.  It is far easier to refer to the band name rather than the particular frequency range covered.

Another wireless network range is commonly referred to as the 5 GHz band since it operates between 5.150 and 5.825 GHz. The 5 GHz band has four different bands:

Recently, a new WLAN band for WiFi networks has been introduced, the 6 GHz band, which potentially covers 5.925 GHz up to 7.125 GHz.

Channel numbers are easier to remember than frequencies. The channels are spaced at intervals depending on the frequency. Channel spacing is often referred to as channel separation or channel width.

Channel spacing is utilized due to the practical limitations of Radio Frequency (RF) signals, which are used in sending and receiving the signals. The overhead required to add data to the signal efficiently.

An RF signal overflows above and below the channel center frequency to a certain point, entering nearby frequencies. The central channel frequency defines the channel location inside the band. Signal bandwidth refers to the actual frequency range required for the transmitted signal, and bandwidth pertains to the width of the frequency space needed by the band.

Preferably, the signal bandwidth must be less than the channel width. It will allow a separate signal to be transmitted on each available channel without the risk of two signals overlapping and interfering with each other.

The figure below illustrates channel spacing, where there are non-overlapping channels allocated on a band. A signal can exist on all possible channels without conflicting with others.

It is still possible that the adjacent channels overlap with one another because they are narrower than the signal bandwidth. In the image below, the signals are centered on adjacent channels 1 and 2, yet they still overlap. To prevent channel overlapping, the signals must be distributed on more distanced channels, reducing the number of channels used in the band.

An oscillating signal is cyclic because the phase loops around a circle. If two identical signals are generated simultaneously, their cycles match and are in phase with one another. If one signal is delayed, the two signals are out of phase.

As RF signals are received, the phase becomes significant. Signals in phase tend to accumulate, but signals that are 180 degrees out of phase tend to cancel out. 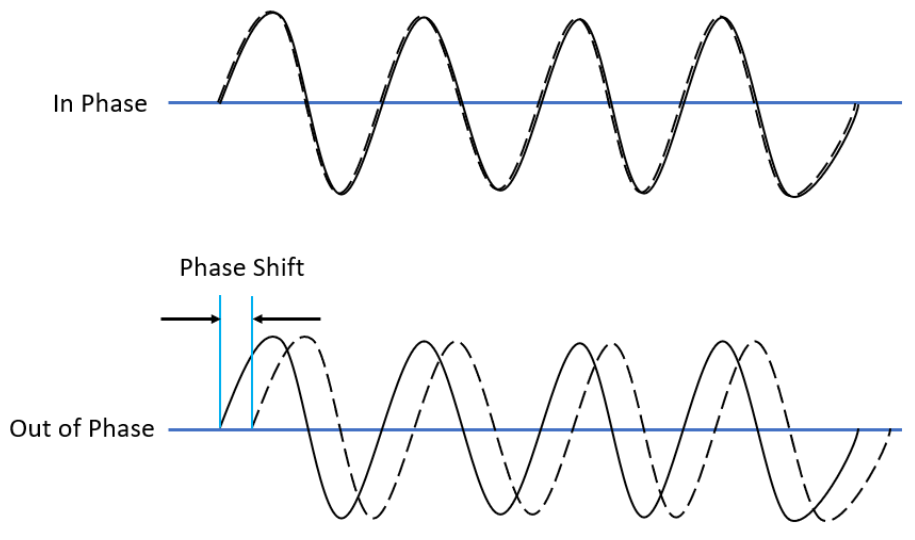 Wavelength is the physical distance traveled by a wave in one full cycle. The Greek symbol lambda is commonly used to represent wavelength (λ). The wavelength of the following wireless LAN channels are:

The wavelengths of three separate waves are depicted in the graphic below. The waves are ordered in increasing frequency. RF waves travel at the same speed regardless of frequency. 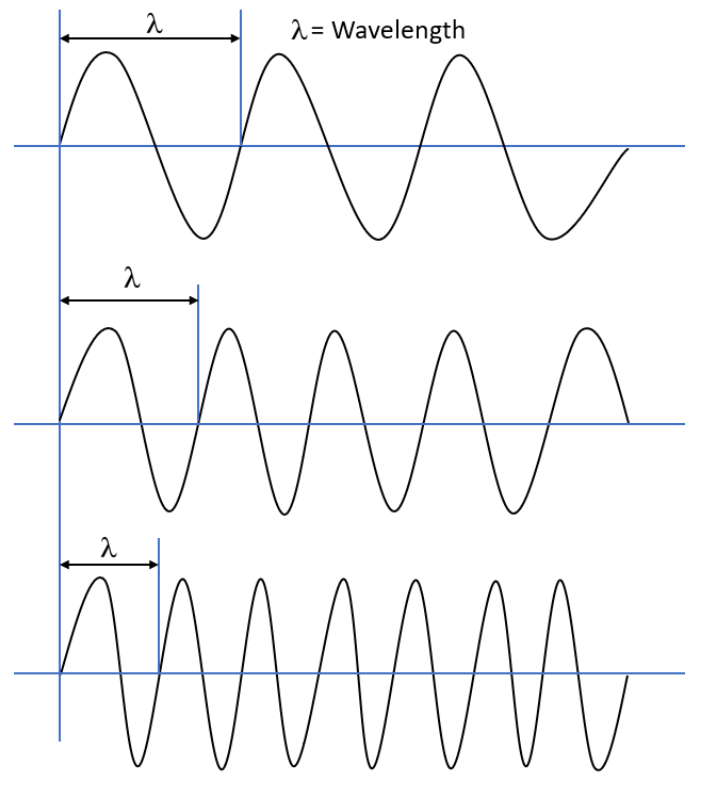 The wavelength reduces as the frequency rises. Wave cycles reach shorter distances as they become smaller. Wavelength is helpful in Wi-Fi network antenna design and positioning.