MAB is typically used as a fallback to 802.1x. For endpoints that don’t support IEEE 802.1X, such as printers and IP phones, MAB provides visibility and identity-based access control at the network edge. MAB can’t check anything besides the endpoint’s MAC address. Therefore, it does not offer secure authentication because MAC addresses are easy to spoof. 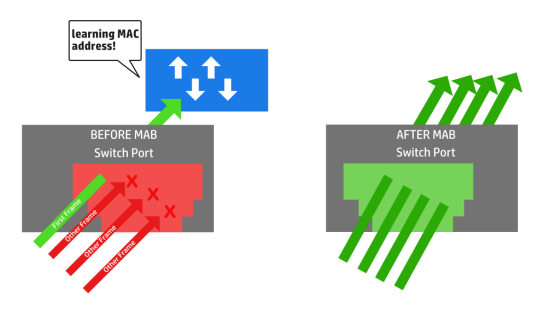 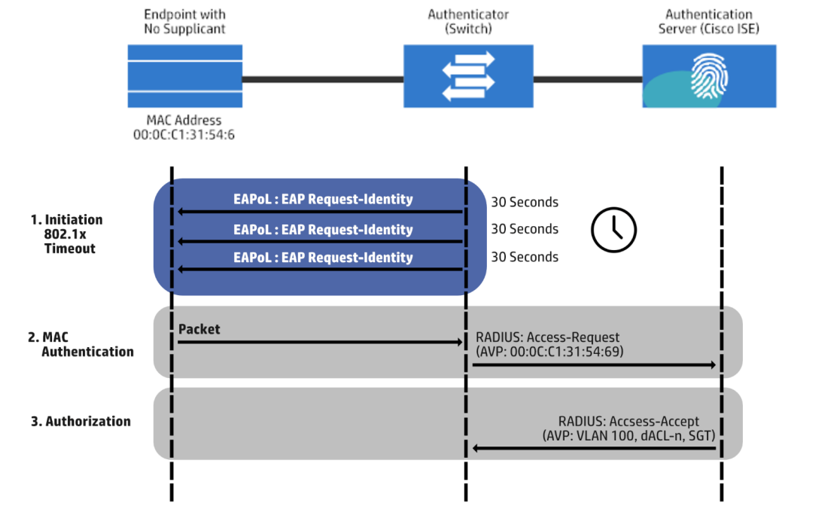 Authentication is started by the switch submitting an EAPoL identity request. Then, every 30 seconds, by default, a message is sent to the endpoint. Three timeouts later, a total of 90 seconds by default, the switch indicates that the endpoint does not have a supplicant. Thus, it uses MAB to authenticate it.

In this step, the switch starts MAB by accepting a single packet from a single interface. It will use this information to determine the endpoint’s originating MAC address. Prior to it, packets that were sent back to MAB during the 802.1x timeout phase are instantly dropped and cannot be utilized to determine the MAC address. Once the switch identifies the source MAC address, it will discard the packet and will create a RADIUS access-request message with the MAC address of the endpoint as the identity. The RADIUS server will receive the RADIUS access-request message and proceed to perform MAC authentication.

The RADIUS authentication server decides whether or not to give access to the device and what level of access it should provide. The RADIUS server provides the authenticator the RADIUS reply, access-accept, which allows the endpoint to have network access. It may also incorporate options for authorization, such as Downloadable ACLs (dACLs), Dynamic VLANs (dVLANs), and Security Group Tags (SGT), as a part of the authorization outcome from the authentication server.

Below are the benefits of enabling MAB authentication:

Visibility – MAB enables network visibility by allowing the IP address, MAC address, switch, and port of a device to be linked through the authentication procedure. Security audits, network forensics, network usage statistics, and troubleshooting all benefit from this insight. At the access edge, MAB operates as a Layer 2 controller, allowing you to regulate network access.

Identity-Based Services – MAB allows you to deliver dynamically configured services based on an endpoint’s MAC address. A device might, for example, be dynamically approved for a certain VLAN or given a unique access list that enables suitable access to that device. MAB is compatible with all dynamic authorization techniques that work with IEEE 802.1X authentication.

RADIUS Server Values – MAB also accepts dynamic RADIUS server values. You can utilize dynamic access lists and VLAN assignments in the same way that you can with 802.1X.

MAB supports one endpoint per switchport by default. A security violation is flagged when it detects more than one source MAC address. The default mode can be changed to the following modes: