Source Tree – A source tree is a multicast distribution tree in which the source is the root and branches extend down the network to the receivers. When this tree is formed, it takes the shortest path possible through the network from the source to the tree’s leaves; thus, it is also known as the Shortest-Path Tree (SPT).

Shared Tree – A shared tree is a multicast distribution tree in which the root is the Rendezvous Point (RP), rather than the source. As a result, a shared tree is sometimes referred to as an RP Tree (RPT). Regardless of the source address, multicast forwarding is according to the multicast group address to which the packets are addressed.

Wasted bandwidth is one drawback of Shared Tree since shared trees can allow multiple sources in an IP multicast group. It is also a potential security risk since unintended sources can send unwanted packets to receivers. 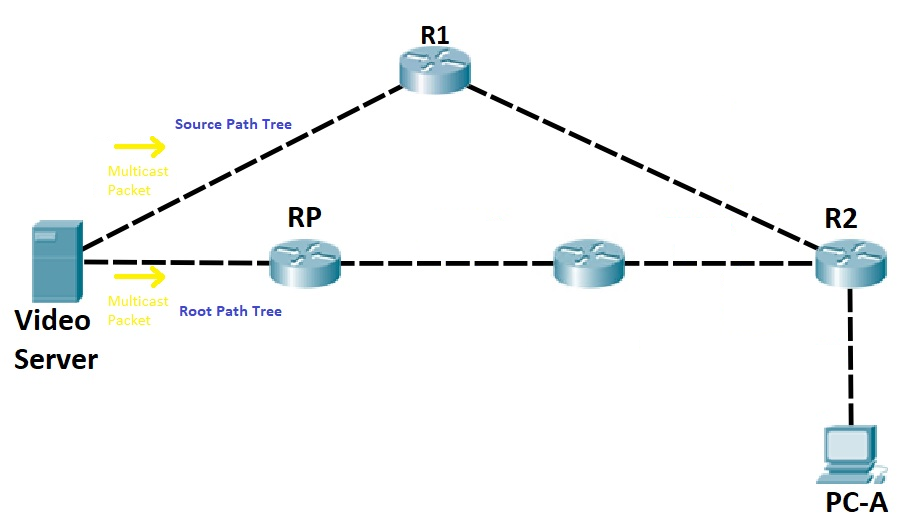 Currently, there are five PIM operating modes which are:

PIM dense mode (PIM-DM) is a push model where we flood all interfaces with multicast packets except for routers that have no directly connected members or PIM neighbors.

On the other hand, PIM sparse mode (PIM-SM) is a pull model wherein we only send multicast traffic when requested. A Rendezvous Point or RP router serves as a point of contact for multicast senders and receivers.

Below we can see the different PIM Messages:

PIM Join Message – A request sent by a router towards the RP.

Internet Group Management Protocol (IGMP) – The protocol used by receivers to connect to multicast groups and begin receiving traffic from them.

Prune Message – Message sent to RP to inform other routers in the path that they can disable multicast traffic forwarding for a particular group.

RPF Neighbor – The PIM neighbor on the RPF interface.

Upstream Router – A router where we receive multicast traffic from.

Downstream Router – A router where we forward multicast traffic to.