The RF signal must be strong enough for it to be fully processed. The RF signal strength can be measured in Watts (W) using the amplitude or the signal waveform’s top peak to the bottom peak height. Decibel (dB) conversion is used for exponential values.

Watts (W) and milliWatts (mW) are absolute power measurements, meaning that the amount of energy in the RF signal must be measured accurately. It is quite simple when the measurement is taken at a transmitter’s output since the transmit power level is often known beforehand. 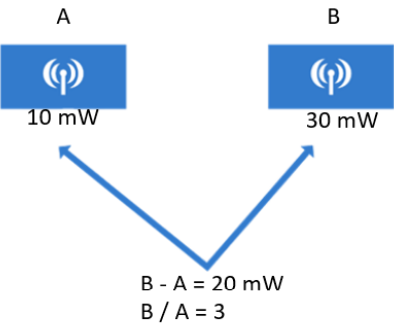 Absolute power measurement values can vary by order of magnitude. In another example below, there are two transmitters, C and D. Subtracting their values would result in 499.999 mW, but with division, D is 500,000 times stronger than transmitter C. 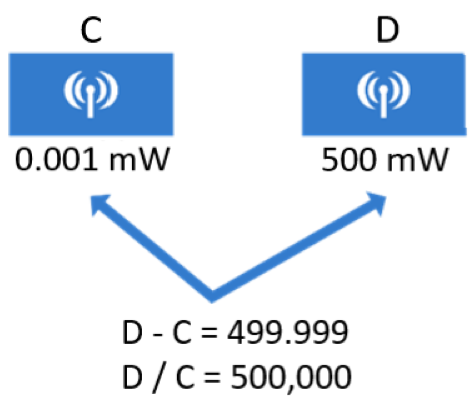 Absolute power values can range from a small decimal to a huge integer number. Therefore, a logarithm function, dB conversion, is used for exponential numbers.

P2 represents the source of interest, whereas P1 is referred to as the source of comparison or the reference value. The formula can also be written as:

The power ratio of the two absolute values is computed first, and the result is converted to a logarithmic scale. Both equations provide the same results, but the division formula is more utilized in wireless engineering. 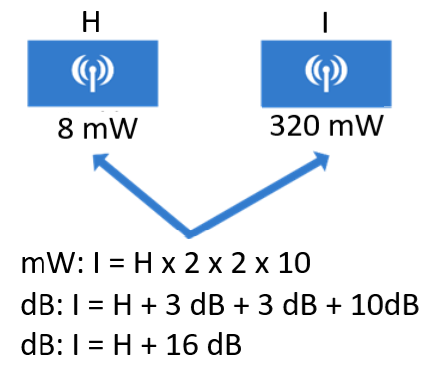 The illustration below shows a transmitter and a receiver, and there will be a net loss along the signal’s path. The signal strength will be reduced at the receiver. Assume that the transmitter’s power output is 500 mW and the arriving signal’s power level at the receiver is 0.00123 mW.

To compare the received and transmitted signal strength, the following formula can be used:

Using the values from the example, the net loss would be 56 dB. To achieve optimum signal strength between the transmitter and the receiver, other transmit power levels can be used or change something about the path.

Another way is to compare the absolute power along the signal path to a common reference value. The signal power level values will undergo dB conversion. The reference power level in wireless networks is typically 1 mW, so the units are in dBm (dB-milliwatt) logarithmic measure.

To convert the power values to dBm from mW, the following formula is used:

Using the previous example, the power level values are now converted as follows:

To get the net loss value, add the power level values of the transmitter and the receiver. That will be 27 + 29 = 56 dB net loss, the same result using the previous formula.