In non-virtualized environments, the data traffic is received by the physical NIC (pNIC) and is sent to an application in the user space via the kernel space. However, in a virtual environment or VNF network, there are pNICs, virtual NICs (vNICs), a hypervisor, and a virtual switch in between.

The hypervisor and the virtual switch take the data from the pNIC and then send it to the vNIC of the Virtual Machine or the Virtual Network Function (VNF), then to the application. The virtual layer causes virtualization overhead and additional packet processing that reduces I/O packet throughput and builds ups bottlenecks.

The image below shows the packet flow for a virtualized system using an Open vSwitch (OVS) architecture: 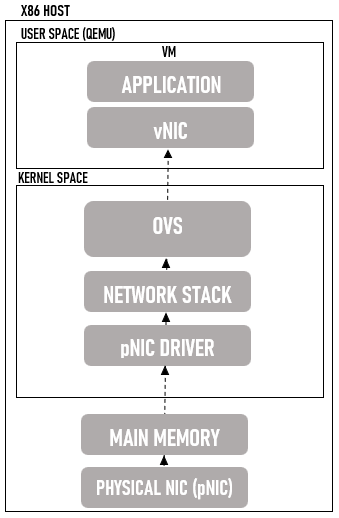 The packets received by the pNIC go through various steps before transmitting to the Virtual Machines’ applications. These steps are as follows:

Each packet received must go through the same procedure, which demands the CPU to be interrupted frequently. Interrupts add a significant amount of overhead, and it affects the overall Virtualized Network Function performance.

Multiple I/O technologies are developed to optimize the VNF network by avoiding the virtualization overhead and increasing the packet throughput. However, these I/O technologies require physical Network Interface Cards (NICs) to be implemented.

However, using PCI passthrough dedicates an entire pNIC to a single VNF. It cannot be shared with other Virtual Network Functions (VNFs). Therefore, it limits the number of VNFs to the number of pNICs in the system.

The image below shows the difference between a standard OVS and PCI passthrough. 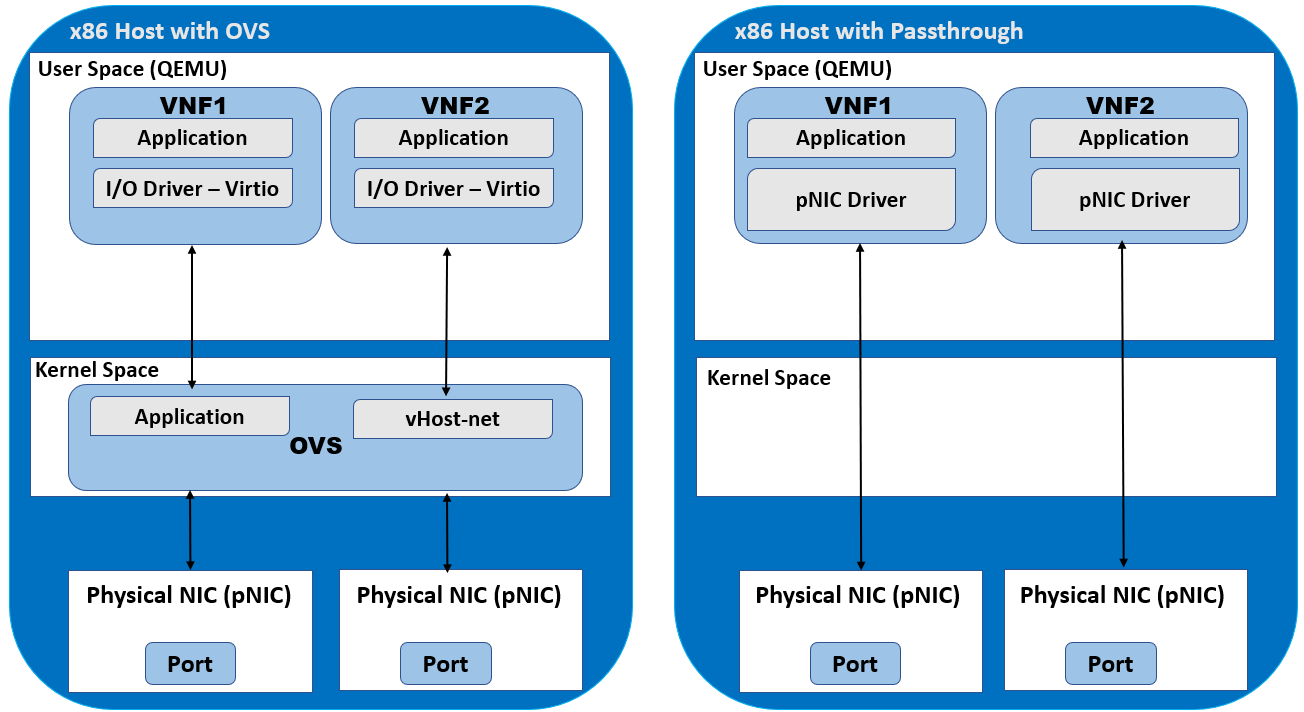 There are two SR-IOV-enabled pNIC modes for VNF traffic switching:

The image below shows the difference between a standard OVS and SR-IOV. 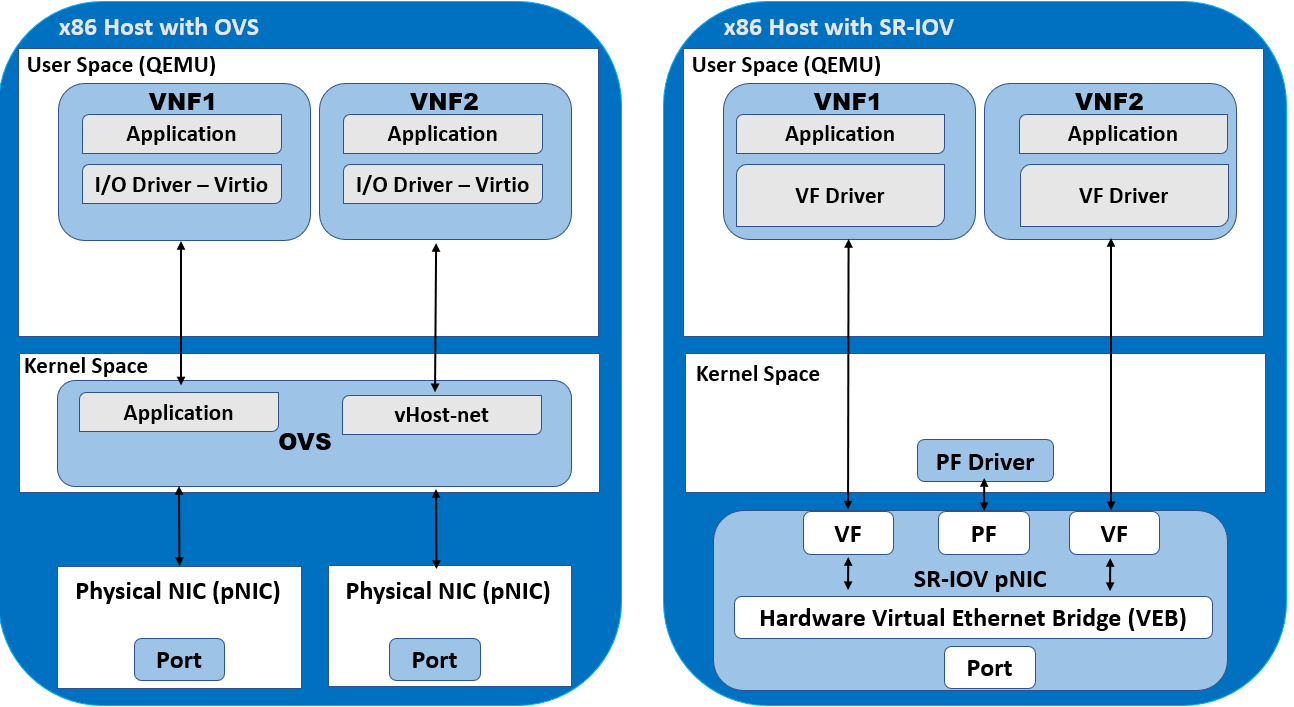 Open vSwitch (OVS) was upgraded with the Data Plane Development Kit (DPDK) libraries to address the performance impact of interruptions on packet throughput because of interrupts. OVS-DPDK operates in the user space. The OVS-DPDK Poll Mode Driver (PMD) polls and processes the data coming into the pNIC. It bypasses the whole kernel space since it wouldn’t also need to send an IRQ to the CPU when a packet is received.

DPDK PMD needs one or more CPU cores dedicated to polling and processing incoming data to accomplish this. When the packet enters the OVS, it is already in the user space. Therefore, it can be directly switched to the VNF and would significantly improve performance.

The image below shows the difference between a standard OVS and OVS-DPDK. 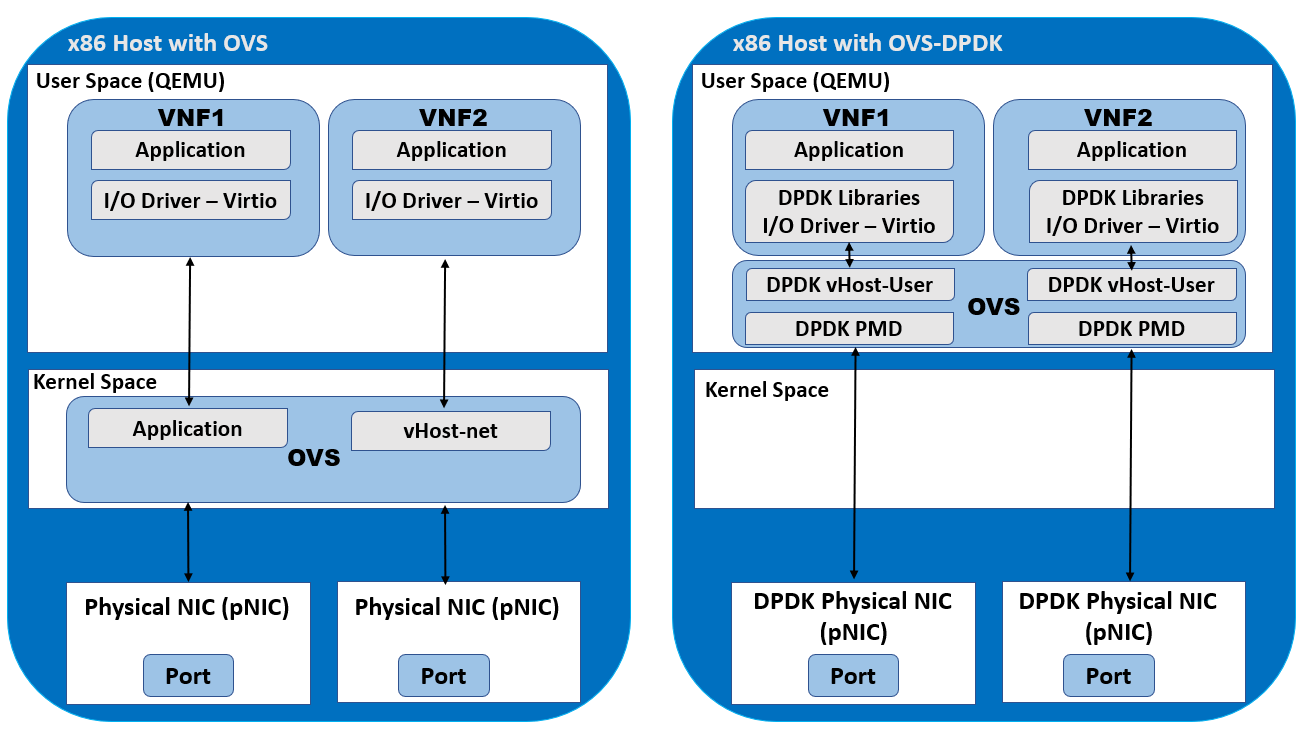