One of the main features of EIGRP is its reliable failure detection and swift convergence mechanism. The EIGRP Hello packet makes these possible, ensuring all EIGRP neighbors are up and running. We can configure EIGRP timers such as the Hello packets sent out depending on the Hello timer, which is by default sent every 5 seconds, but the EIGRP Hello interval is longer for slower speed interfaces such as T1 or frame relay interface at 60 seconds.

One of the essential EIGRP timer settings is the hold time, which is the quantity of time EIGRP shall consider a link as reachable and functioning. The default hold timer value is thrice the amount of the hello interval. Therefore, considering the default router EIGRP hold timer is at 15 seconds because the default hello timer is 5 seconds. For slow-speed interfaces like frame relay, the hold timer is 180 seconds.

The hold time decrements. Once the hello packet is received, it immediately resets the timer. However, if the hold timer runs down to 0, EIGRP considers the link unreachable and informs DUAL of a topology change.

Whenever link failure occurs, the interface changes its state to down, and all the other interfaces connected will also go down. So when this failure happens, the EIGRP neighbor relationship also moves to a down state, and path recomputation is immediately done to any prefix where the EIGRP neighbor was considered a successor.

Once EIGRP detects that the link failed, the feasible successor immediately becomes the successor route acting as a backup route. The router then advertises an update packet for that path, considering the new EIGRP path metrics. Routers on the downstream run their own DUAL for any affected prefixes to check concerning the new EIGRP metrics. 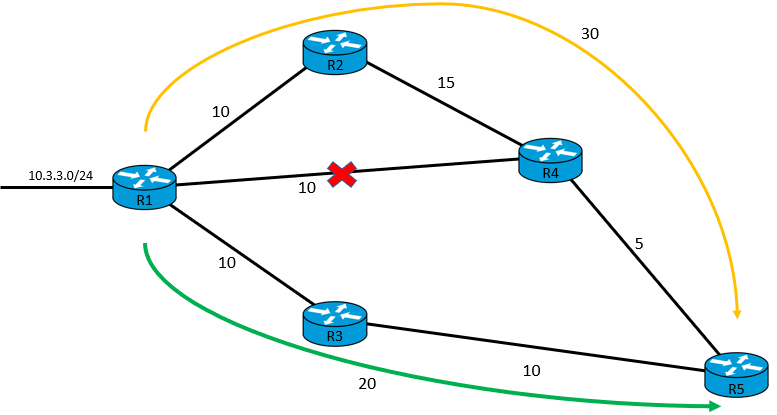 There are times that a feasible successor is not present for a prefix. DUAL will then perform a new route calculation, changing the route state from passive (P) to active (A) in the IP EIGRP topology table.

Once the router detects a change in topology, it then sends out query packets to EIGRP neighbors for the route. The query in the EIGRP packets consists of the network prefix having the delay set to infinity, so the routers in the prefix know that it has gone active. Once the EIGRP query packets are sent, the reply status flag is set for all the neighbors on a prefix basis.

Once the query packet has been received, the EIGRP router does one of the following:

Once the router receives a reply for all the downstream queries sent out, meaning DUAL is complete and updates the route to passive, it then sends a reply packet to any upstream routers that forwarded a query packet to it. When the reply packet for the prefix is received, the reply packet is marked for that neighbor and prefix. The reply process continues upwards for the queries until the first router’s queries are received.