Virtual Extensible LAN (VXLAN) is an encapsulation method that tunnels a Layer 2 network over a Layer 3 underlay network. With the rapid increase of server virtualization over the last decade, the high demand has led to multiple problems with our traditional Layer 2 networks. The Virtual Extensible LAN protocol supports the virtualization of the data center network and also solves problems such as:

The physical network infrastructure, also known as the transport network, is our underlying network. We have Layer 3 protocols in our underlay network, so dynamic routing and ECMP are utilized. On the other hand, an overlay network is a virtual network built on top of the physical underlay network.
VXLAN packets use a VXLAN network identifier or VNI, similar to a VLAN ID. It is a 24-bit identifier capable of generating 16 million VXLAN segments or bridge domains (overlay), which is more than adequate for even the largest service provider.

The VTEP is the node where Virtual Extensible LAN tunnels originate or terminate. VTEP is connected to a traffic source which may be stand-alone servers or virtual machines. This node encapsulates and de-encapsulates Layer 2 traffic and maps Layer 2 and Layer 3 packets to the VNI that will be utilized in the overlay network. It has two interfaces: 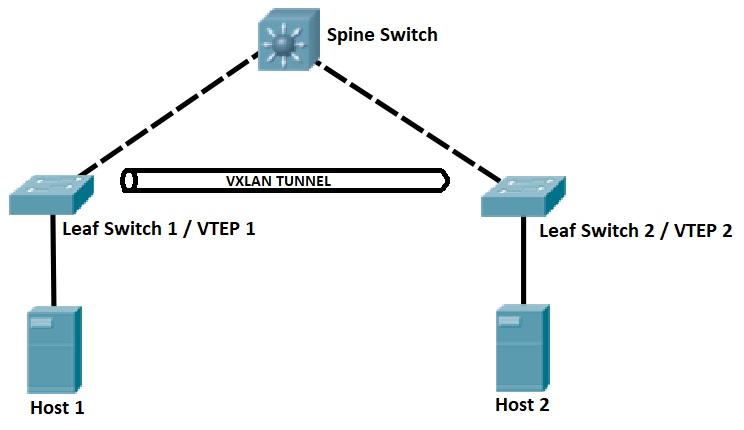 VTEP provides the connection between our underlay and overlay networks. Each VTEP has an IP address in the underlay network and one or more VNIs in the overlay. To forward traffic from one host to another, a source and destination VTEP will create a tunnel and will only exist to deliver a VXLAN header inside a frame.

When a frame reaches a switch, it encapsulates it with UDP ports and IP addresses’ headers. The switch will then forward it to the underlay and a destination VTEP where the packet is de-encapsulated.

NOTE
4789 is the standard UDP destination port number for Virtual Extensible LAN. However, when VXLAN was first implemented in Linux, many vendors used UDP port 8472.

Virtual Extensible LAN is a data plane protocol and can be used with any control plane. There are various VXLAN control and data planes supported by Cisco devices, and these include VXLAN with: