We already know that we need to use a multicast routing protocol to forward our IP multicast traffic. PIM dense mode (PIM-DM) is a push model where all interfaces are flooded with multicast packets except for routers that have no directly connected members or PIM neighbors. On the other hand, we can say that PIM sparse mode (PIM-SM) is a pull model wherein we only send multicast traffic when requested.

Let’s look at the sample topology below. When source R1 starts to forward multicast traffic towards R2 and R3, they will both send multicast packets to R4 and create duplicate flow. We can avoid this by electing a PIM forwarder for this segment. 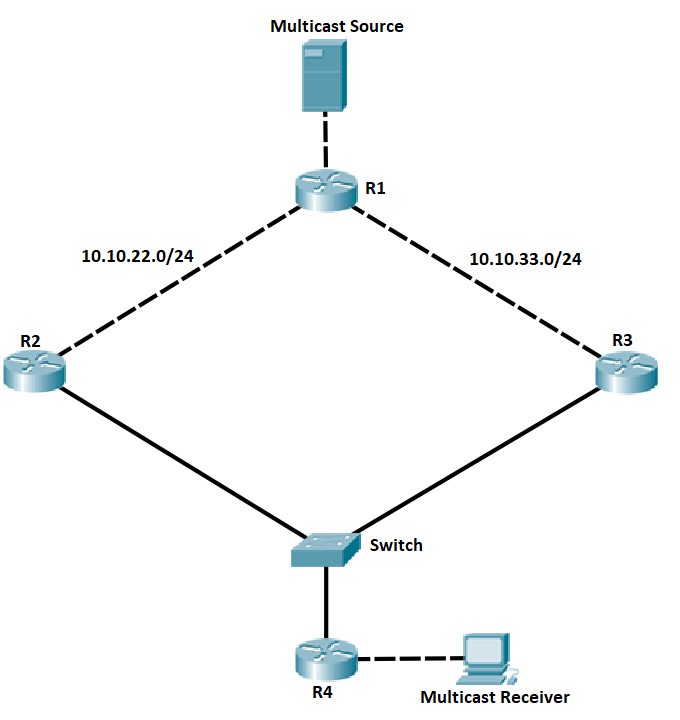 PIM has no idea of routing information, but it relies on the unicast routing protocol. Both R2 and R3 send PIM Assert messages containing admin distance (AD) and route metrics back to the source to determine which router should forward the multicast packet. The winning router becomes the PIM forwarder while the losing router prunes its interface.

NOTE
After 3 minutes, the pruning times out and the losing router will begin forwarding again. It will trigger the PIM Assert mechanism and repeat the whole process. If the winning router goes offline, the loser will take over as the PIM forwarder.

The PIM forwarder gets elected based on the following criteria:

Let’s say R2 and R3 are both using IGP (OSPF). By default, they should have the same admin distance, 110. Then their Cost is also the same, Cost 10. This now leaves us with the tiebreaker which is the router with the highest IP address (looking at the 3rd octet, 33 > 22). R3 wins and becomes the PIM Forwarder.