IP Multicast PIM Sparse Mode (PIM-SM) is under the Protocol Independent Multicast (PIM) family of multicast routing protocols. It was intended for networks with distributed multicast application receivers. However, even if PIM-SM is for the sparsely populated multicast group across the network, it also performs great in densely populated networks.

Before proceeding, please take note of the following key terms:
Rendezvous Point or RP – A router that serves as a point of contact for multicast senders and receivers.
PIM Join Message – A request forwarded by a router to the RP.

Routers will send a PIM join message under the following conditions:

PIM-SM employs an explicit join model in which receivers send an IGMP join to their locally connected router called the Last-Hop Router (LHR). Then, the LHR sends a PIM join in the direction of the root of the tree. With a shared tree (RPT), the PIM join is sent to the RP. With Shortest Path Tree (SPT), it is sent to the First-Hop Router (FHR) where the source transmitting the multicast streams is connected. These explicit joins generate a multicast forwarding state. 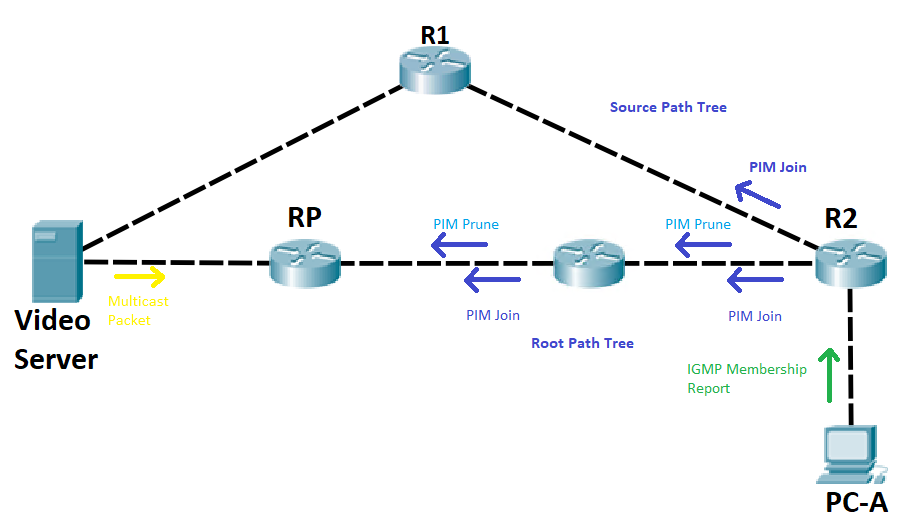 Based on the diagram above, here’s a step-by-step process for IP PIM Sparse Mode:

Joining the RP is also referred to as RPT (Root Path Tree) or shared distribution tree. RP is the root of the tree. Therefore, it specifies the destination for multicast traffic. The network may contain multiple RPTs as a result of the fact that the multicast groups may have distinct sources and receivers.

RP discovery is achieved by the concept of a Bootstrap Router (BSR), which knows the information about RPs and provides this information to all other routers. Unless the RP information is configured statically using the command ‘ip pim rp-address x.x.x.x’, each PIM-SM network should have at least one BSR candidate. If there’s a shorter path to the multicast sender, we can switch to that path.

Once the multicast traffic is received through the RP,  the source IP address of this Video Server traffic is also learned. Switching to the SPT (Source Path Tree) is now possible. The directly connected router, R2 in this case, can use the shortest path toward the Video Server. R2 will communicate with the source via PIM join messages. R1 will begin forwarding multicast traffic to R2 via the most direct path.

Reverse Path Forwarding (RPF) is an algorithm to prevent loops and ensure that multicast packets arrive on the correct interface. RPF functions as follows: