A Cisco proprietary advanced Layer 3 IP switching technology called Cisco Express Forwarding (CEF) was developed to be up to date on the fast-paced demand of our ever-evolving network structures. Since the 1990’s Cisco Express Forwarding operation has been the default switching mechanism used whenever it requires packet switching operation using the general-purpose CPU on most Cisco platforms that utilized ASIC (Application-specific Integrated Circuit) and network processing units (NPU’s) that requires high packet throughput.

Below are some of the advantages of this switching mechanism:

Theoretically, Cisco Express Forwarding can be used in any part of the network but is designed to work in a high-performance network that requires high resiliency Layer 3 IP switching. In CEF, the general-purpose CPU functions in software-based and hardware-based routers are different. In software-based routers, the general-purpose CPU handles all the operations, including CEF switching (software CEF), while the hardware-based router does software CEF implemented by specialized ASICs using forwarding engines called the Ternary Content Addressable Memory (TCAM) and NPUs (hardware CEF). These forwarding engines enable the router’s packet switching, forwarding, and route lookup capability.

The Ternary Content Addressable Memory (TCAM) of a switch enables the evaluation and matching in more than one field of a packet. TCAM is an enhanced extension of CAM architecture that allows the processing of upper-layer data like identifying the L2/L3 source/destination IP address, Quality of Service markings, protocol, among other things. An enhancement of TCAM over CAM is that it offers more flexibility in searching using binary. There are three possible search results using TCAM: 0 if it is true, 1 for false, and X, which is a ternary combination that means do not care.

The TCAM entries are stored in VMR format. The V in VMR stands for Value which indicates the fields that should be searched, such as protocol fields and the IP address. The M in VMR is the Mask and it shows the interest and queried fields. The R in VMR is the Result and it specifies the action which matches the Value and Mask that should be taken.

Since general-purpose CPU is considered cheap, the cost of software-based cisco routers is getting cheaper, but the packet throughput is being sacrificed. 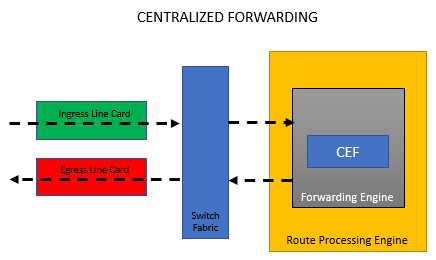 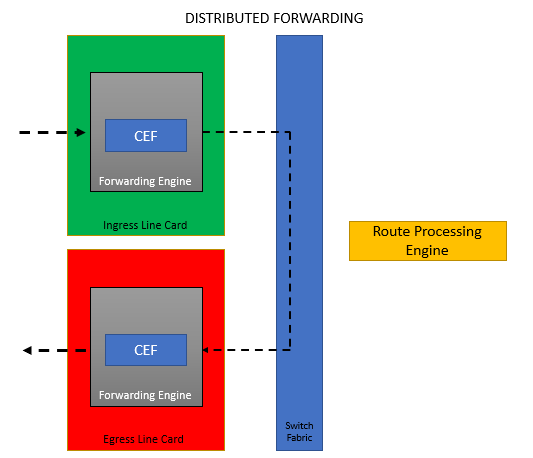 Software CEF is widely known as Software Forwarding Information Base with the following components below:

The hardware-based routers require expensive ASICs to design, produce and troubleshoot with limited functionality but enable very high packet rates because they are only programmed for a specific task. Routers can also be equipped with NPU’s as an alternative to ASICs and an advantage is that NPUs are programmable, giving the flexibility to programming and firmware.

dCEF is a mode of Cisco Express Forwarding operation in which line cards such as Versatile Interface Processor maintain mirror copies of the FIB and adjacency tables. The line cards perform the express forwarding between port adapters; this alleviates the Route Processor of involvement in the switching operation.